Xero has recently introduced new Accounting Reports. The layout customisation of new reports does not provide the option to group accounts by Account Code Prefix. This account grouping feature is used in Service Leadership SL-Index reports (commonly referred to as SLI Reports).

Who does it affect?

ConnectWise Partners that generate SLI Reports, or that use custom layouts of reports that group accounts by Account Code Prefix.

How do we know?

If you log into Xero and check out the Reports area, you'll notice duplicates of some reports, a version marked New and the version you've been using (the old version).

You can use both versions of the report, but the interface between the two versions is different and layouts of old reports are not available in the new version. This is because the full feature set of the old reports has not been built into the new reports yet.

What are we doing about it?

We've logged a ticket with Xero (CX0008164859/CX0011110563) asking if this functionality and old reports will be removed permanently. You can also add support and monitor the latest updates through the Xero Community Discussion on this: Reporting - Option to add account numbers & zero balances to financial statements

Old reports (and their layouts) will not be removed until the new version of reports has full functionality. There is no time frame of when the layout customization of new reports can be used without losing any functionality however we've been advised that there will be plenty of notice provided about when old reports will be removed.

In the meantime, you can still use the old version of the reports you use for SLI reporting.

The user will need to click on the "⋮" next to the income statement and select the option to view the older version of the report. 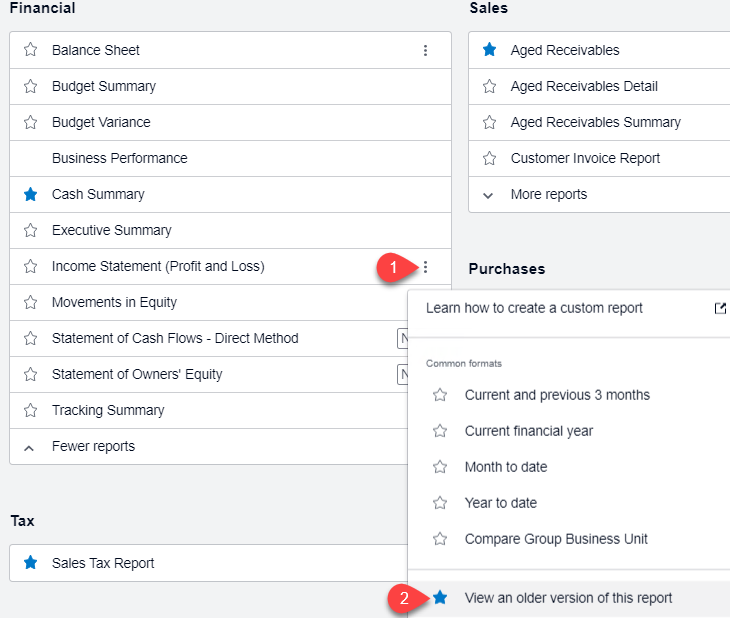 We're currently looking at how to create new reports with the layouts needed to report for SLI.